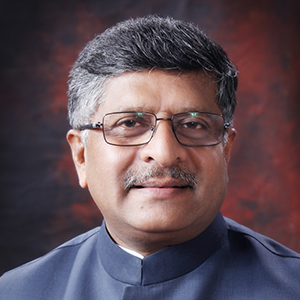 Ravi Shankar Prasad is the Union Cabinet Minister for Law and Justice & Information Technology in the Government of India, headed by Prime Minister Mr. Narendra Modi. He is an eminent Lawyer and a Senior Advocate in the Supreme Court of India. He is a Member of Parliament since the year 2000 and has been the member of important Parliamentary Committees in the Parliament like Finance, Communication & IT, Petroleum & Chemicals.

Since his appointment as the Cabinet Minister for Communications and Information Technology and on 26th May, 2014, he has been spearheading the task of reviving India’s telecom sector. He is also actively leading the task of developing India into a global electronics manufacturing hub. India is sitting at the cusp of a Digital Revolution. It is a priority agenda for present government and as the Minister for Communications & IT, he is at the forefront of its implementation. The flagship program of Digital India, which aims to bring about good governance by extensive use of Information Technology, is being implemented under his leadership. He is also spearheading reforms in the Indian legal and judicial system.

Prior to this, in September 2001, in the government headed by Prime Minister Mr. Atal Bihari Vajpayee, he was appointed as a Minister of State for Coal and Mines and was entrusted with the responsibility of reviving the loss making Coal India Limited- a Public Sector Undertaking managing the vast coal resources of India. He earned accolades for the turn-around of Coal India Limited and also by initiating reform process in the Coal and Mines Ministry and opening it up. In July 2002, he was given additional responsibility as a Minister of State for. In this capacity he played instrumental role in reforming India’s electoral system and bringing out greater transparency in politics.

In January 2003, he was elevated in the Union Cabinet as Minister for Information and Broadcasting. He pioneered the Cable Television reforms in India and ushered the country into digital TV era. He is credited for introducing Direct To Home (DTH) satellite telecast services in India. He played a key role in liberalizing the FM radio services in India which opened up the private sector participation in this field. Today FM radio is a thriving industry in India. Industry status granted to Indian Cinema got a great boost during his tenure by way of corporatization, institutional access to finance and elimination of illegal financing.

Ravi Shankar Prasad is a very senior leader of the ruling Bhartiya Janta Party ( BJP ) and held very crucial organizational positions of the party at the national level, including national general secretary, chief spokesperson of the party and head of the Media division. He frequently appears on national and international media. As a Cabinet Minister, he is also Spokesperson of the Government. He is a widely travelled man and represented India in various International Conferences and UN.

He has also been a human rights activist. As a lawyer, he took the cause of undertrial prisioners and also argued certain important and momentous cases, impinging upon the propriety and fairness in the political life of the country. He has been an activist right from his student days, where he suffered imprisonment. He also fought for human freedom, press freedom and restoration of democratic values, when they were under severe stress.

Ravi Shankar Prasad is married. His wife, Dr. Maya Shankar is a Professor of History in Patna University, Bihar, India.